A Salted Caramel and Vanilla Baked Cheesecake... And the disaster that followed 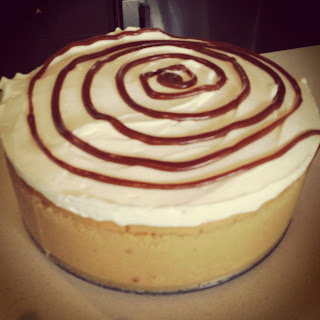 I am developing a loathing for my current oven. You heard me rant about my initial obstacles with the Lemon Cake but now it has sabotaged what was the best cheesecake ever!

I have tried all solutions to stop the horrid oven over cooking my food on the outside and leaving the inside rather raw, I have googled until I could google no more and nothing seems to work. Bad oven, naughty oven. It's grounded... No baking for a whole week.

On to happier things. Whilst scouring the land of Google I happened upon a recipe from Donna Hay for the Cheesecake of my dreams. A Salted Caramel Cheesecake.... Heaven.

Cheesecake - Take 1
I made the base with lovely fancy shortbread rather than just your run of the mill brands. I was going to make my own but with the hours of prep the cheesecake would need I was worried I'd lose the motivation if I attempted too much. This was the first cheesecake I would be making all alone. The experience was daunting.

I do have one small confession. We all know of my caramel disasters... I just don't mix well with the stove top so I did ask little sis S to do my caramel topping for me. She has a knack for these things and shows me up regularly when I try to ice a cake (once again I refer to the Lemon Cake disaster). I have to say I was immensely delighted when her caramel came out a bit gluggy too.. It was lovely to know it wasn't just me. No worries though, there was more than enough smooth caramel to use for the topping, I just spooned out the lumpy bits. Sorry S... 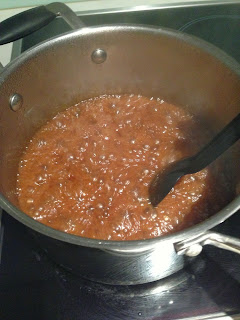 From here I made my batter. And a monstrous load of cream cheese and ricotta later, it was poured into the base and popped in the oven.. And so the disaster began. I know the horrid oven enjoys overbaking the top of my cakes. I was prepared for this with foil loosely covering the tin to prevent browning. Due to my intense paranoia when using this oven, I also researched every possible tip I could find for cooking a cheesecake. I checked that it was firm to the touch, that nothing jiggled. That the top was slightly browned. The set cooking time was 1 hour 30 mins. 1 hour 45 mins later and my cake looked and felt ready. I wasn't  convinced, i felt uneasy about it but it passed all the googled tests, and google never lies... So I ignored my instincts and removed it from the oven.
it cooled on the bench and was then placed in the fridge to set. 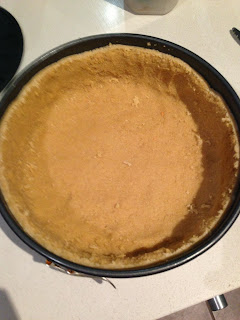 The following morning I spooned a small amount off the top for a taste test (and to ensure it was cooked). It was beyond delicious. I made the whipped cream icing, spread it on top, drizzled with caramel sauce and popped it back in the fridge ready for my upcoming cake date with a girlfriend (and fellow cheesecake lover B) that afternoon.

When B arrived I made some tea and began to cut the cake. I could feel it was wrong. And as I removed the first slice I could see that the middle was still batter. How upsetting. Thankfully I had back up Hot Chocolate Cupcakes in the fridge or the Cake Date would have been a cake-tastrophy (see what I did there?)...

Once I muster up some new cheesecake confidence I will attempt it again... Or once I lose it, smash my oven and have to buy a new one.

Seriously bake it... Donna Hay has never let me down before so I refuse to think that this was her doing!!!
Hopefully it only takes one go for you.

But honestly I'm a little proud of myself anyway... I didn't drop the cheesecake on the floor as I lifted it out of the oven :)

1. For the Caramel Sauce; in a saucepan over low heat stir the cream, butter and sugar until the sugar has dissolved. Increase the heat to high and boil. Cook for 5-7 minutes until the sauce has thickened. Set aside.

3. Place the Shortbread and Almond Meal into a food processor and process until coarsely chopped. Add the Butter and combine.

4. Press the biscuit mixture into the cake tin and refrigerate for at least an hour.

5. In the bowl of a mixer, beat the Ricotta and Cream Cheese for 5-6 minutes until it is smooth. Add the sugar and beat until well combined. Add the eggs individually, ensuring mix it beaten well following each addition. Add the golden syrup, salt and 1 teaspoon of the Vanilla and mix well.

6. Pour the mixture into the biscuit shell.

7. Place the cake tin into a baking dish and pour enough boiling water into the dish to reach halfway up the cake tin.

8. Bake for 1 hour and 30 minutes or until cheesecake is firm to the touch.

9. Remove the tin from the water and leave to cool in the tin.

10. Refrigerate for 3 hours or until set.

11. For the icing; whisk the cream, sour cream, icing sugar and 1 tablespoon of the Vanilla until soft peaks form. Spread over the top of the cheesecake, drizzle with the Caramel Sauce and sprinkle with Sea Salt Flakes to serve. 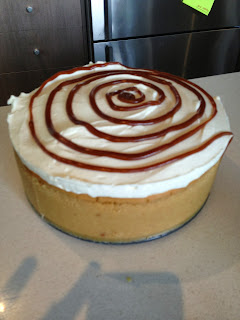