This thing is fantastic. It is divided to seasons so you can cook with what is seasonal in the current time of year.

I couldn't wait to test it out. I chose to cook a Caramelised Onion and Anchovy Tart.

The house smelled fantastic while the onions were cooking. They had a lovely texture and looked golden brown. Because I'm a little stingy and wasn't prepared to shell out $20 for a sherry vinegar I substituted it with a red wine vinegar and added a bit more sugar instead... 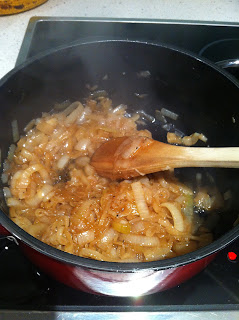 Anchovies gross me out a little so I had my work cut out for me to make a dish that I was going to enjoy. The recipe makes 4 but we're only little people so I halved the recipe and made 2. 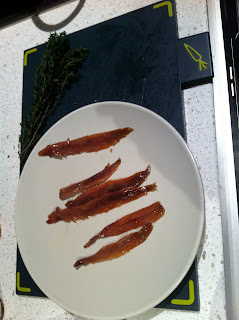 After cooking the onion mixture, I spread it out onto the puff pastry and added the little garnishes. The recipe called for pitted olives, but I love mixed Australian Olives so I used those instead with the pips still in. The anchovies were laid on top, along with some thyme and into the oven they went. 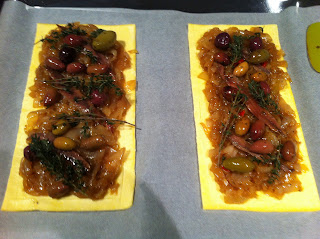 Once in the oven, I continued on with an assignment... 2 minutes in I realise "Oh no!! I forgot to brush the pastry with egg yolks!". I ran to the oven, juggling an egg from the fridge and a bowl, whisking the yolks in a frenzy and retrieving the tarts from the oven as fast as I could put my mitts on. The yolks went on the pastry and the tart was returned to the oven. The only disadvantage being that the pastry didn't rise as nicely as the one in the picture. 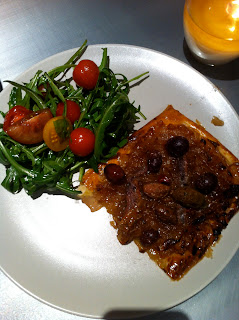 This tart tasted fantastic! Easily the best I've ever had... and I'm not just saying that.
Try it out for yourself and let me know what you think...

1. Preheat the over to 200 C.
2. Heat a large saucepan over medium heat. Add the oil and onion. Cook, stirring occasionally, for 20-
25 mins or until golden and caramelised.
3. Stir in the vinegar, sugar, salt and pepper and cook for a further 5 minutes or until thick and syrupy.
4. Cut each pastry sheet in half and place on baking paper in a baking tray. Score a 1cm border around
each pastry sheet.
5. Divide the onion mixture among the sheets, top with olives, anchovies and thyme.
6. BRUSH THE PASTRY EDGES WITH EGG YOLK!!!! and bake for 12-15 minutes or until puffed and golden.

I served it with a lovely salad of rocket and tomatoes with a balsamic vinaigrette. Bon apetit!
Posted by Unknown at 22:38