A friend and colleague of mine walked up to my desk on my first shift back after my 4 month holiday and explained that he had a mission for me.

He had seen an episode of 'New Girl'... She mentioned Maple bacon cupcakes... He wanted some... 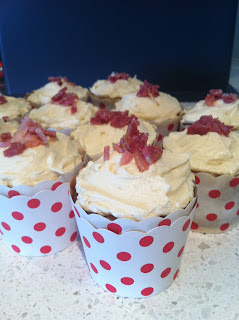 The process was a little strange. You had to fry up the bacon without oil and keep the drippings afterward. The cooled drippings get creamed with the butter to give the cake that bacon flavour. Bacon pieces go in there too.

The icing was fantastic. Maple syrup flavoured. I could have eaten it from the bowl.

When the cakes looked cooked and there was just a very slight crumb reside on the skewer I removed them from the oven. I tried one straight away and the inside tasted undercooked but I couldn't figure out why. They couldn't go back in because the tops would burn... Maybe the temperature was too high.

I decided to take them to work regardless and see what everyone else thought. I sprinkled bacon bits over the top, popped them into the box and off I went.

I clenched my teeth as they went around the room and offered that I was sorry if they were undercooked... Everyone thought I was mad. I picked up a cake myself and had a bite. After cooling the cake had settled and was perfectly cooked. A little greasy for my liking though.

It wasn't to suit my taste. My friend, who is male, loved them... He ate 4. Another male at worked was also a fan. The females were not... Guess it comes down to tastes... But it was an interesting experience.

If you attempt them at home, caramelize the bacon pieces that are sprinkled on top. It will make the world of difference. 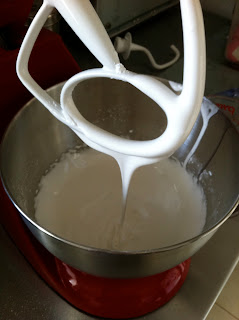 1. Preheat oven to 180 C
2. Cook the bacon strips in a fry pan (only add a drip of oil if necessary, no oil is preferred). When they are well cooked place the bacon strips onto paper towel to dry and keep the drippings in the pan. Place the drippings in the fridge.
3. Place the bacon strips into a food processor and grind into a mince-like consistency.
4. Beat the butter and bacon drippings until light and creamy. Add the brown sugar and maple syrup and beat until combined. Add the egg and beat until just mixed.
5. Sift the flour, bi-carb and baking powder together.
6. Add a third of the flour mixture to the batter, followed by half of the milk, when mixed incorporate another third of the flour, the rest of the milk and then the rest of the flour.
7. Fold in 1/4 Cup of the minced bacon (ensure there is a small amount remaining for the icing).
8. Divide the mixture between 8 cupcake papers and place into the oven for approx 20 mins. Remove when a skewer comes out with a few remaining crumbs.

Icing:
1. Mix maple syrup and butter until combined.
2. Add the sugar in small batches until well beaten. Spread icing onto cupcakes
3. Place remaining bacon onto an oven tray and sprinkle with sugar. Place in oven for 5-10 mins until sugar has dissolved.
4. Sprinkle caramelised bacon and a small amount of sea salt over the top and voila!