Sitting in my apartment, I was reminiscing about my recent adventures overseas. Everything is relaxed, easy, you don't have to keep appointments, go to work, clean...
It was time to plan my next adventure. After such a big trip I decided on a smaller holiday. Thailand was my first thought, but it was pushed aside for the new year.
After much deliberation I settled on the idea that I wanted to visit Australian wineries. So where to go? My choices were plentiful... Barossa valley, Yarra valley, Hunter valley, the list goes on.
A good friend told me tales of his friend's romantic trip to the Hunter Valley where they drank wine, had picnics, lots of hugs and kisses and all that mushy stuff that us girls pretend to hate but secretly wish for...
The Hunter Valley had been selected but I could not possibly spend 10 whole days there so I needed something else. It'd been ages since I'd been to Sydney. That was added to the list. I've never been to Canberra. Can you believe that. I am as Australian as they come and I have never been to our nation's capital. I was so disgusted with my ignorance that Canberra was added in capital letters.

On Tuesday I headed off. By Tuesday night I was driving around the circular roads of Canberra. Dinner at "Little Brussels" Belgian Beer Cafe who had run out of mussels!!! I almost cried. Drank my favourite beverage; rekorderlig cider, I ate fish and chips. The food was rather nice. I'd definitely try it again in pursuit of some belgian style mussels. Off to the casino I went for a game of Carribbean Stud (or Canberra Stud as they have so tastefully named it).

Poorer than I was the evening prior, I woke at the crack of dawn, or rather 9am, and headed to all of the monuments before making the drive to Sydney.

The following day, determined to right the wrongs I headed down to the Opera Bar at the Opera house and spent my afternoon eating a seafood salad and chips and sipping on some lovely Cloudy Bay Sauvignon Blanc. If you can handle the seagulls then take a seat outside along the waters edge looking back at the Opera House and spend your day, in the sun, admiring the views. It truly was my second favourite experience this week. The view is gorgeous, the staff are friendly and the food tastes great. I could have stayed there for days.


After drinking more than my fare share of wine, I headed back to our hotel. On my way I passed Zumbo's and thought I'd pop in for their happy hour. The dessert train looks fantastic and the flavours of their macarons are bizzarre. Check out my post on Zumbo's


The next day I caught the ferry over to Watson's Bay and sat on the verandah of Dunbar House, a beautifully restored mansion on the waterfront, eating prawns and bruschetta and a bottle of wine. Their Devonshire tea is also to die for. This was by far my favourite experience in Sydney. It was relaxing, the food fresh and seasonal and the setting is breathtaking. The lovely waiter was happy to entertain me with stories of his travels and experiences around the city and he made the day all the more pleasurable. As it started to rain and the weather cooled, they brought me a blanket so I stayed warm and topped up the wine :) they host weddings weekly and I can see why.
Check out my post on Dunbar House

From Watson's Bay I made my way back into the city to check out Mr. Wong's; a new cantonese restaurant. Their food was unlike any Cantonese I have eaten before. Say good bye to your local Chinese dive guys, you will never go back once you have experienced this. And their cocktails...wow!
Check out my post on Mr. Wong

That night, after dinner, I ventured down to The Rocks at Circular Quay where they were holding a "village bizarre". You walked through market stalls with yummy looking food (was such a shame that I was so stuffed from lunch and dinner or I would have eaten my way through here too). They had spanish churros, cupcakes, a barbecue... I walked through the showcase stall to witness giggling girls getting their hair done... Down hidden lanes to bars and comedy shows. If it hadn't been raining I could have danced the night away at the silent disco.


For my final full day in Sydney I decided to head to the trendy Surry Hills district. I began my adventure at Ruben Hills cafe for breakfast. It was delicious and the coffee was fantastic. I loved the feel of the place, very comfortable.


From here I explored the streets and happened upon Sparkle Cupcakery. Naturally I was unable to resist so I exited 10 minutes later, cupcakes in hand, ready to take on the world.
Check out my post on Sparkle Cupcakery
Within an hour and a half I was standing out front the famous Bourke Street Bakery, my mouth watering as I observed all the pastries available. How could I not go in? The place is an institution.

After walking, and walking, and walking, I had returned to the city. Bellies full, thinking about where I should go for dinner. The choices were Jamie's Italian, which I had absolutely loved when staying in Covent Garden in London, or the Meat and Wine Company in Darling Harbour. I had such a lovely memory of Jamie's that I wanted to preserve it as it was, so I decided on the Meat & Wine Co. After a steak, I was once again full to the brim. A walk was required along the waterfront.
During my refreshing summer night walk I observed a Lindt cafe hidden amongst the plethora of bars and nightclubs. "Dessert?".
One hazelnut gateau later I was well and truly done with eating... for the day.
I headed back to my hotel to commence a food coma and start all over the following day.
Next stop: The Hunter Valley.
I had wines, cheese platters, pub meals, Thai. The region looks amazing. The vineyards are delightfully pretty and everywhere you ate had a view of the surrounding country.
My favourite wine tasting experience was at Scarborough. They brought out a cheese platter, and you got a placemat to place your wines on with the names of each written so that if you returned to one to compare you knew exactly what you were looking at. 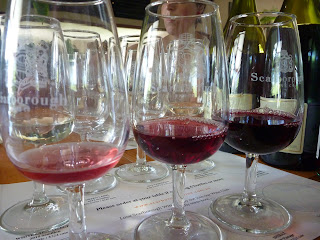 I visited McGuigan's winery, Brokenwood, Scarborough, Gun Dog, Audrey Wilkinson and Pukara Estate.
Pukara Estate makes the most delicious olive oils and balsamics. Stay tuned for uses with Strawberries among other things... I bought the biggest bottle of Caramelised Balsamic Vinegar I could, and a smaller one for later and tried all the different varieties of olive oil.
For food you have a never ending list of options. My breakfast was included in the B&B I stayed in so I got to enjoy a lovely country breakfast each morning at Peppers Convent.
I visited Harrigan's Pub for dinner ate the largest lamb shanks I have ever seen. These things were gigantic.  This was easily the best meal I had in the hunter valley.


I also ate at a Japanese/Thai restaurant called oishii. The food was nice, seemed such a strange mix, Japanese and Thai paired together. The view was beautiful. The outside eating area was on decking so you had a complete view of the surrounding vineyard. It started to get cold but I refused to go back inside.
For lunch, I found out from one of the locals that Cafe Enzo was the nicest cafe in the area. It is a quaint little spot in the midst of a tasting room for a boutique vineyard and an Alpaca farm (of all things!). Their food matches their boutique surrounds, and although it is very tasty, the portions are quite small.
So after an 11 hour drive I have arrived home. I am still amazed at how much food I had eaten through the week. I feel like I've grown to twice my size. I love taking road trips to new places to try out the food that other cities have to offer. I still think Melbourne is the stand out in culinary genius though. You can never go past your own local favourites...