I love cookie dough... And cake batter for that matter. My family think I have an illness... I call it enjoying myself. There is nothing better than scraping the bottom of the bowl when you have just placed a batch of cupcakes into the oven (by scraping I mean leaving a generous dollop in the bowl).

Cookie dough is lucky if it even makes it as far as the oven. I am the single person that can put paid to the myth that eating raw cookie dough makes you ill. I've done it many a time and never had a problem.

So with this love for dough in mind, I set out to make the ultimate cupcake. One whose main flavour would be the delectable raw cookie dough....


I was overwhelmed by how many recipes there were already available.

I found a recipe for eggless cookie dough (just for those softies who think it makes them sick) from another blog; 'The Cupcake Project'.


I simply mixed the dough with some thickened cream until it was to my preferred consistency, added some crushed cadbury chocolate and it was ready to spread.

Next I needed to make the perfect cake to accompany it. I settled for Burnt Butter Cupcakes... Sounds gross, tastes fantastic!

All a burnt butter cupcake consists of is a basic vanilla cupcake... With overcooked butter. Thanks again to The Cupcake Project for the recipe.

1. Melt butter in a frying pan on a medium heat. Once it has melted continue to cook until after it has boiled and the butter has browned. Remove and cool until it reaches room temperature.

2. In another bowl, sift together the flour, baking powder, bi-carb soda, and the salt.

3. In your mixer's bowl, whisk the egg whites until light and fluffy. Add the sugar and mix well. Add the room temperature burnt butter and the vanilla and mix until well combined.

4. Alternately mix the flour mixture and milk into the egg mix. Mix well.

5. Fill cupcake liners at just over half full.

6. Place in oven at 180 degrees Celsius for 20 minutes until the tops are browned and the knife comes out wet, but clean. 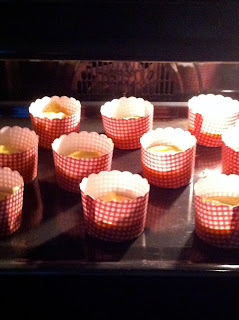 Upon reflection, I think the cookie dough is a little rich. My colleagues at work (and loyal taste testers) told me it was my best yet...
I tried out the paper cases and to be honest, I'm not convinced. I find they make the act of eating the cake more difficult and it makes more mess... I think I will stay loyal to the old traditional patty cases. Nothing beats silver foil around a pretty cupcake!!
The cupcakes taste amazing. It is surprising the difference that burning butter can make to the taste!